Hurricane warnings have been dropped, but tropical storm warnings remain from Florida’s east coast and now extend to South Carolina. Isaias, the Atlantic’s second hurricane of the 2020 season, will bring gusty winds and heavy rain to parts of Florida today.

“Strong wind shear from the southwest, as well as dry air being ingested into the storm, has caused Isaias to weaken fairly rapidly [Saturday] and the satellite presentation is severely degraded,” Spectrum News Chief Meteorologist Mike Clay said Saturday evening.

Even as a tropical storm, locally heavy rain and gusty winds will occur along the east coast of Florida. Through 7 a.m. Sunday, top wind gusts were near tropical storm levels from Boca Raton to Port St. Lucie. 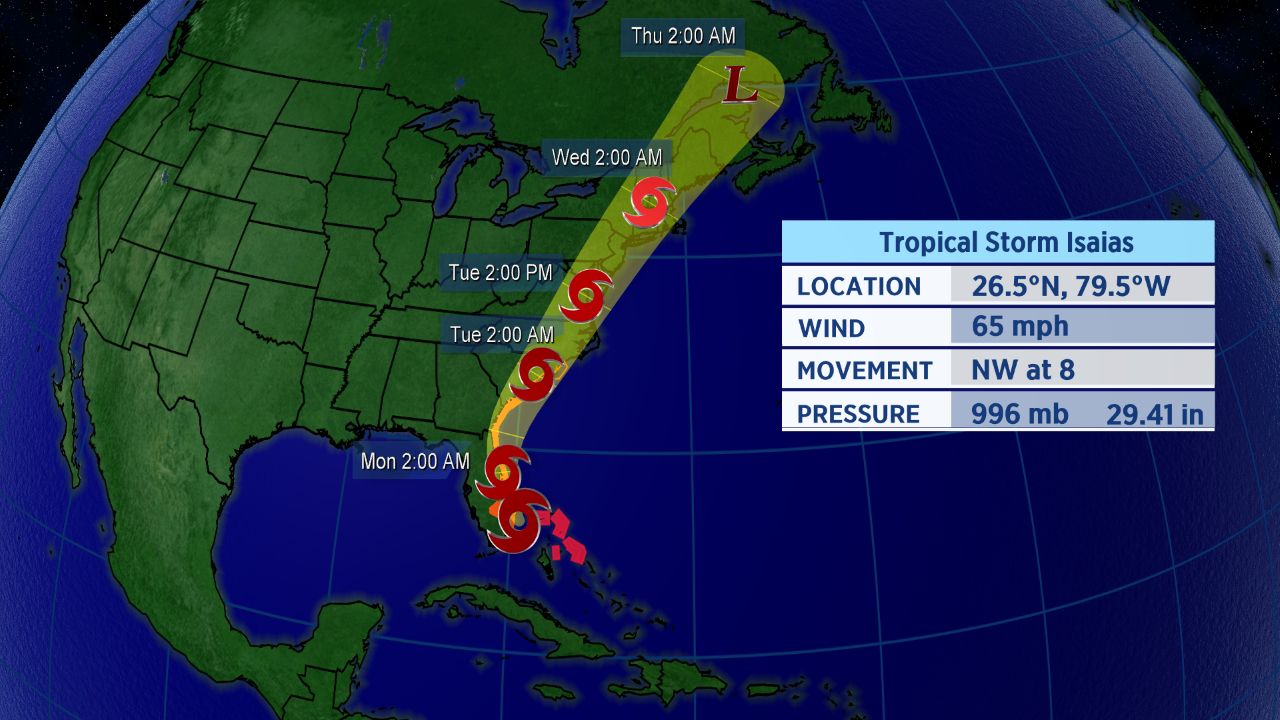 Isaias is turning northward, skirting the Florida coast. As it rounds around a weak ridge in the Atlantic, it’ll gradually turn to the northeast in a couple of days.

The storm is looking to bring impacts to Florida throughout Sunday and into Monday.

Tropical storm warnings run from Hallandale Beach, Florida to the South Santee River in South Carolina. Lake Okeechobee is also under this warning. A tropical storm watch has been issued up to Surf City, North Carolina.

Storm surge watches are also in place for parts of Florida’s east coast.

For now, the center of the forecast cone of uncertainty takes Isaias up the east coast of Florida this weekend and we could see landfall with the east-central Florida coast in about 24 hours. The Carolinas should see impacts early next week.

Extent of Impacts Depends on Track

Even though Isaias is no longer a hurricane, it will still cause issues as it runs northward.

Remember, even though the name changes there is basically no difference between the impacts of a high-end tropical storm and a low-end category 1 hurricane. #flwx

The storm brought heavy rain and flooding, along with wind damage, to parts of the Caribbean. Hurricane warnings for the northwestern Bahamas were dropped Sunday morning as the storm moved away.

Isaias was the second hurricane of a busy to-date 2020 Atlantic season.